Bin News about School Opening or not

While schools in Gujarat, which have been closed since March due to Kovid, are preparing to reopen after the Diwali vacation, the session is likely to be extended by more than 50 days till the second week of June.

As a result, exams will be held in the scorching heat of summer. Not only that, after the board exam in May, the standard 8, 9 and 11 exams may be held in June.

The 21-day Diwali vacation has started in schools across the state. As a result, the government may start schools after Diwali and extend the second term by 50 days as the school did not resume in the first academic session this time. 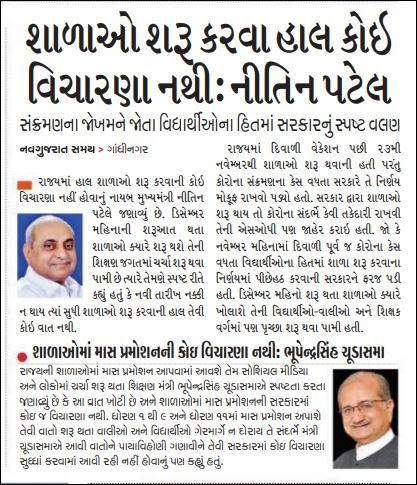 Because of this, students will have to go to school even in the heat of May-June. Normally, the board exams for Std 10 and Std 12 are held in March, May next year, while the annual exams for other standards, which were held in April, may also be held in June 2021.

This time the program changed because of Corona
The Gujarat government wants to prolong the academic session after Diwali. Under normal circumstances the first session starts in the month of June and lasts for 105 days. The session ends with a 21-day Diwali vacation. Usually the 21-day vacation starts two-three days before Diwali and ends around Devadivali, but this time the schedule has changed due to Corona.

The next session will be reimbursed in the second session

The second session will be 150 to 155 days, as the time wasted in the next session can be compensated. The schools will open at the end of November, which means that the next five months will mean the end of May. The government is preparing to invite students from Std 9 to Std 12 to school after Diwali vacation. This year, Diwali vacation in Gujarat schools has been held two weeks early from October 29 to November 18.

Vacation two weeks early, a clear sign of school opening after Diwali In Gujarat, schools and colleges have been closed for the last seven months due to Corona, students’ online classes are taken. This is why the first Diwali vacation in the state has started two weeks before the festival. This is a clear indication that schools may reopen after Diwali. The academic year of the schools affiliated to the Gujarat Board of Secondary and Higher Secondary Education is generally divided into two sessions. The first semester begins in June and lasts for 105 days. The session ends with a 21-day Diwali vacation

0 Komentar untuk "Bin News about School Opening or not "